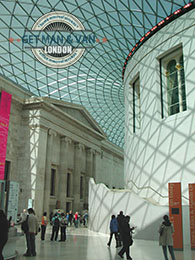 The English capital, London is home to numerous world famous places of interest that attract people from all over the world. The most astonishing fact about some of these sites is that they are free. Here are some of the most interesting free attractions of the largest city in the United Kingdom.

Goldsmiths’ Hall – The Goldsmiths’ Hall is a Grade I edifice which houses one of the Twelve Great Livery Companies of the City of London. The company dates back to the 14th century and is responsible for testing the quality of precious metals that are used in the production of coins and hallmarking currency. It received its Royal Charter in 1327 and since 1339 has been located at the same site. The current building is the company’s third and is considered to be an architectural treasure by the local authorities. It was one of the few structures in Central London that wasn’t gravely harmed by the German bomb raids during World War II. Today the hall is one of the city’s primary landmarks and you should definitely visit it once your relocation to the city is over. You can ease and speed up your move by using professional man and van services.

Guildhall Art Gallery and Roman Amphitheatre – The Guildhall Art Gallery was founded during the 19th century and displays one of the finest art collections in the world. The venue is housed in an edifice that dates back to the late 1990s as its original building was destroyed during World War II. The earliest pieces of the gallery’s collection date back to the second half of the 17th century and span until modern days. Underneath the edifice is located the city’s Roman amphitheatre which was considered to be lost until it was found during the construction work of the building. Today it is one of London’s most interesting tourist sites and tends to attract both local and foreign travelers. The gallery showcases the works of renowned artists such as:

British Museum – The British Museum is the most visited museum in the United Kingdom and the fourth most visited in the world which makes it amazing that it is an admittance free site. Its visitors have the opportunity to witness an immense collection of historical artifacts such of which date back to ancient times. It is divided into several sections and has plenty to offer to its guests, so you will certainly not regret exploring the British Museum once your move is over and you have arranged all the details with the man and van specialists that helped you with your relocation.

Little Holland House – This residential edifice was the home of the renowned artist, craftsman and designer, Frank Dickinson. It is displays paintings, furnishings and copper objects which were made by Dickinson. The building itself is listed as a Grade II edifice is considered by many to be one of the most beautiful structures in the English capital.