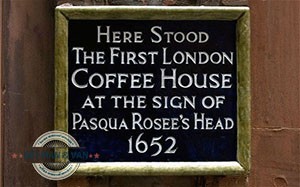 Tea consumption has been a longstanding British custom and tradition. Even though tea as species of plant grows and comes from Asia – mainly China and the Indian Peninsula, British people have embraced and appreciated the taste, flavour and quality of good tea.

Teahouses and later on coffeehouses where tea and coffee were consumed in public with the intent to socialise and mingle with others began appearing in the British capital during the sixteen hundreds. Conceptually, teahouses and coffeehouses have existed before the fifteenth century, though there were none (at least not officially) in London.

If you have recently moved to London and want to learn about some of the city’s hidden history and forgotten trivia, don’t ask the man and van guys that moved your stuff, but grab a cabbie and ask them to take you to Cornhill in the City, where the first ever tea and coffee houses in London were established.

Exchange Alley or Change Alley is one of the oldest locations in the capital, it was there that Pasqua Rosee opened the first coffeehouse in London in sixteen fifty two. The precise location of the coffeehouse was in St Michael’s Alley in Cornhill. It is believed that the founder Pasqua Rosee was born in an ethnic Greek community in Ragusa, Sicily in the early seventeenth century. In sixteen fifty one, a British merchant named David Edwards met Rosee in Smyrna, Anatolia. At the time Edwards was a member of the Levant Company and traded in Turkish goods. Edwards employed Rosee as his personal servant and brought him back to England.

Rosee set up his coffeehouse in sixteen fifty four – its trademark sign was a portrait of Rosee himself. Local alehouses and ale traders weren’t too happy with the newly established competition, as Rosee was pulling in a fair bit of business. In result, and under mounting pressure, Rosee accepted one Christopher Bowman as an official business associate. Bowman was a freeman of the City of London, whereas Rosee was a former servant, and business regulations of the time required that a business be managed by freemen only.

Currently, the spot where Rosee’s first coffeehouse was located is occupied by The Jamaica Wine House.

Now here is something else the man and van guys might not know – the first ever proper teahouse in London was opened by Thomas Garraway shortly before the Stuart Restoration of sixteen sixty. Garraway explained the new beverage in a special pamphlet made available on thirtieth of September, sixteen fifty eight. He put emphasis on the fact that tea was consumed by the fashionably rich, and that physicians in London did approve of drinking the new beverage. In the pamphlet he went on to say that the new drink is called Tcha and that the Chinese (and Orientals of Asia-Minor) have been drinking it for centuries.

Other pioneering tea and coffee houses in London were Jonathan’s – also in Exchange Alley, also Lloyd’s Coffeehouse at Lombard St.