The United Kingdom has many interesting places which aren’t London, Edinburgh, York or Manchester. In fact some of these places are so beautiful that people often remain speechless once they see them in person. Fortunately for you, we will share with you some of them so that you can visit them sooner rather than later. 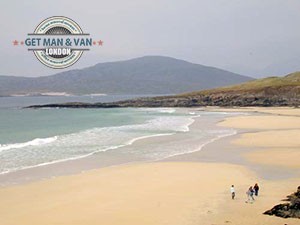 Believe it or not but one of the ten most beautiful beaches in the world is situated on the shores of Scotland. Seilebost Beach lies in the Outer Hebrides of Scotland and is often mistake for a white sand beach on the shores of the Maldives. Nearby the beach is located the village of Seilebost which offers excellent accommodations to all its guests.

Scotland is also the location of the British Mount Blanc. The Observatory Gully on Ben Nevis in the Lochaber area of the Scottish highlands is beyond any doubt the most beautiful peak in the United Kingdom. With a height of 1.344 meters it is the highest mountain peak in the union. Alpinists come to the Observatory Gully on e regular basis to climb it and reach its top.

You don’t need to go to Italy in order to see an authentic Italian village. Simply pack your bags and head to the village of Portmerion in Gwynedd, Whales. It lies in the northern parts of Wales and was designed by Sir Clough Williams-Ellis between 1925 and 1975 in the traditional Italian village style. Portmerion is so beautiful that is was used as the location of the 1960s surreal spy drama “The Prisoner”.

The Royal Pavilion in Brighton is an edifice that will remind you of the Taj Mahal in India. The building was built in three stages and was the seaside retreat of George, Prince of Whales, who became the Prince Regent in 1811. The building is often described as one of the most incredible edifice in the United Kingdom and a testament to this claim is the fact that both local and foreign visitors come by the number to Brighton to witness it in person. Plus a trip to Brighton is much more cost effective than a trip to India.

Speaking of trips, you don’t need to travel for hours in an airplane to experience the beauty of New Zealand. Instead you simply need to take a road trip to Cheddar Gorge. The area is home to some of the most picturesque views of the United Kingdom. The gorge is the site of the Cheddar Caves where Britain’s oldest complete human skeleton (Cheddar Man) was found. The skeleton is over 9.000 years old and was excavated in 1903.

As you can see the UK has indeed numerous interesting places that are worth a visit. So as soon as your relocation is done with the aid of a man and van company, find the time to visit these places with your family. Don’t worry about using man and van services, as by doing so you will not only go through a stress-free move but you will also ensure the safe and in time completion of your move.

You can also consider going to Cornwall as it is the home of the world famous the Minack Theatre open-air theatre.