We Serve is the motto of the London Borough of Islington, which is quite true in many respects. The borough was formed by the merger of two metropolitan administrative regions – Finsbury and Islington (our regional Islington man and van branch ). 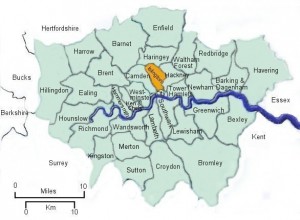 Islington is one of the older parts of London, the area was first named by the Saxons, which means Islington’s history spans back to the tenth century, even further back in time. In Saxon, as well as in Old English, the word Islington translates to Gisla’s Hill, where Gisla is a person’s name. The name Islington though was not used until the start of the seventeenth century. As mentioned above We Serve is the motto of the borough, indeed this is quite a befitting phrase, and perhaps this can be attributed to the fact that Islington the area, sits on a hill which has been the main freshwater supply of the City of London for many centuries. There were a number of springs at the foot of the hill on which Islington sits, and those were used to supply City of London’s freshwater. Initially, water was drawn through wooden pipes from the spring to the city. The three main springs which fed the water supply system at the time were Clerkenwell, London Spa and Sadler’s Wells. However during the last two hundred years a number of major water supply projects have taken place in London, thus Islington is no longer the sole water supply area for the city.

Some of the areas in this borough in which we have places local man and a van teams are Canonbury, Barnsbury, Finsbury, Farringdon

Geographically and administratively, the borough of Islington is made up of twenty two areas, and eighteen electoral wards. In two thousand eleven, there were just over two hundred thousand recorded residents of the borough, with nearly half of the entire population being white British. Before the twentieth century, the area became popular with residents and citizens from other parts of London, as the wells and springs provided for certain spa facilities. Residential pockets began appearing around some of the springs, others saw the development of small scale spa resorts. Islington has been changing during the last century, and that is only natural as World War II bombings destroyed much of the borough and area during the mid-nineteen forties. Since then, the area has become predominantly residential, though there is also quite a bit of entertainment spots and venues scatted around Islington as well. These days, Islington, the borough and area is a nice part of Inner London favoured by many notable residents, media personalities, heavyweight professionals and other such as a good place to live. Islington has the highest density population in the United Kingdom.

We also have local man and van team in Holloway, we cover N7, N19 and the whole Tufnell Park and of course St Luke’s

Arts, culture and entertainment have always been an inseparable part of Islington, and there are many good theatres, galleries, museums and other such places where one can touch and feel the history of one of London’s oldest inner city areas. Perhaps the best known performance venue in the borough is the Almeida Theatre. The Almeida is a studio theatre with three hundred and twenty five sea capacity. Many of the successful plays staged by the theatre have seen notable success in London’s East End which is indeed recognition. There is also the Islington Museum showing the history of the borough, and it came to be. Another popular such venue in the area is the London’s Regional Canal Museum, dedicated to London’s water bearing facilities. An interesting place to visit in Holloway, Islington is the local animal farm. The farm is obviously not industrial but only for display and educational purposes. There young children can have their first contact with many domestic animals, in controlled environment. Emirate’s Stadium – the former Arsenal home pitch is also in Islington.

Interesting fact: Islington is featured as the second cheapest area/property in the famous British version of Monopoly. Back when the game was designed, Islington wasn’t as popular and attractive as it is today, which is reflected in the game.