London is a huge city with a long and interesting history. The capital of England has many attractions that captivate the attention of tourists and residents alike. Among the finest places where you can spend several hours at while you are in London are the lively street markets that are scattered across the whole territory of the Metropolis. Most of those places are pretty old, and here you can find a wide range of goods – some of which you never thought you actually need.

Let’s have a look at some of the best street markets in London at the present moment.

Definitely one of the busiest street markets in the capital at the present moment, Camden Market is reputed for attracting as many as 100 000 visitors every weekend. Goods being sold here include crafts, bric-a-brack and food. It is indeed not among the oldest markets in the city, because Camden Market was originally opened in the very beginning of the 20th century, but due to the quality of the goods that are on display on its stalls, as well as the very central location of this amenity, it has managed to surpass many other similar developments in popularity. The importance of Camden Market for London has been recognised on many occasions. The last time was 300 million pounds were invested by Teddi Sagi, an Israeli billionaire and current owner, in order to develop the market further – the plan is to come in fruition by the end of 2018. 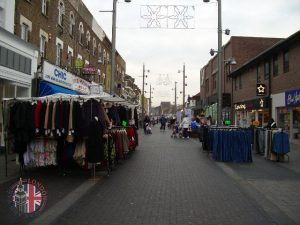 Located just 100 metres off the High Street in Walthamstow E17, Walthamstow Market is definitely on the top of the list of landmarks in the London Borough of Waltham Forest. The Market was originally opened in the beginning of the 19th century and gave a great spur in the development of Walthamstow Village – the historic heart of the district. Even though reputed to be a mile long, Walthamstow Market is actually close to a kilometre in length – this still makes it one of the biggest street markets in Europe. Its current strength is in the independent retailers operating from here, and especially those specialising in the ethnic food section – Polish, Russian, Indian, Chinese, Caribbean, South Asian etc. Another great place to visit here is the pie and mash shop – L. Manze – which was opened in 1929 and is one of the few establishments of its kind in London that are still operating and actually thriving. In addition to attracting many tourists, Walthamstow Market serves as an amenity to local residents from nearby districts who often do their weekly shopping here. As reported by many reliable man and van in Leyton and trustworthy man and van in Highams Park specialists, the population of those districts has been steadily rising in recent years. We can imagine that one of the reasons people choose those places is the presence of a big street market as Walthamstow Market nearby.

When talking about street markets in London, we cannot miss to mention the biggest one of all. Specialising in fruit, vegetable, and flowers, the New Covent Garden Market covers a territory of 23 ha and hosts as many as 200 independent contractors. The flower portion of the market is especially important, because it was estimated that around 75% of all florists in London actually get their supplies from here. Additionally, 40% of the fruit offered in hotels and restaurants in the capital come from here. The Covent Garden Market has a really long history. It was originally established centuries ago, though it has been on its current location since 1961 when the Covent Garden Market Authority was set up – thus the word “New” was added to the name of the place. The land that is occupied by the New Covent Garden Market today was previously used as a base for the Nine Elms Locomotive works. Note that it is a wholesale market, so individual purchases are more or less an exception here. It is still a very popular tourist attraction that is visited by quite a few people because of the sheer beauty of the place, especially from 04:00 to 10:00 Monday to Saturday, when the flower market is taking place.